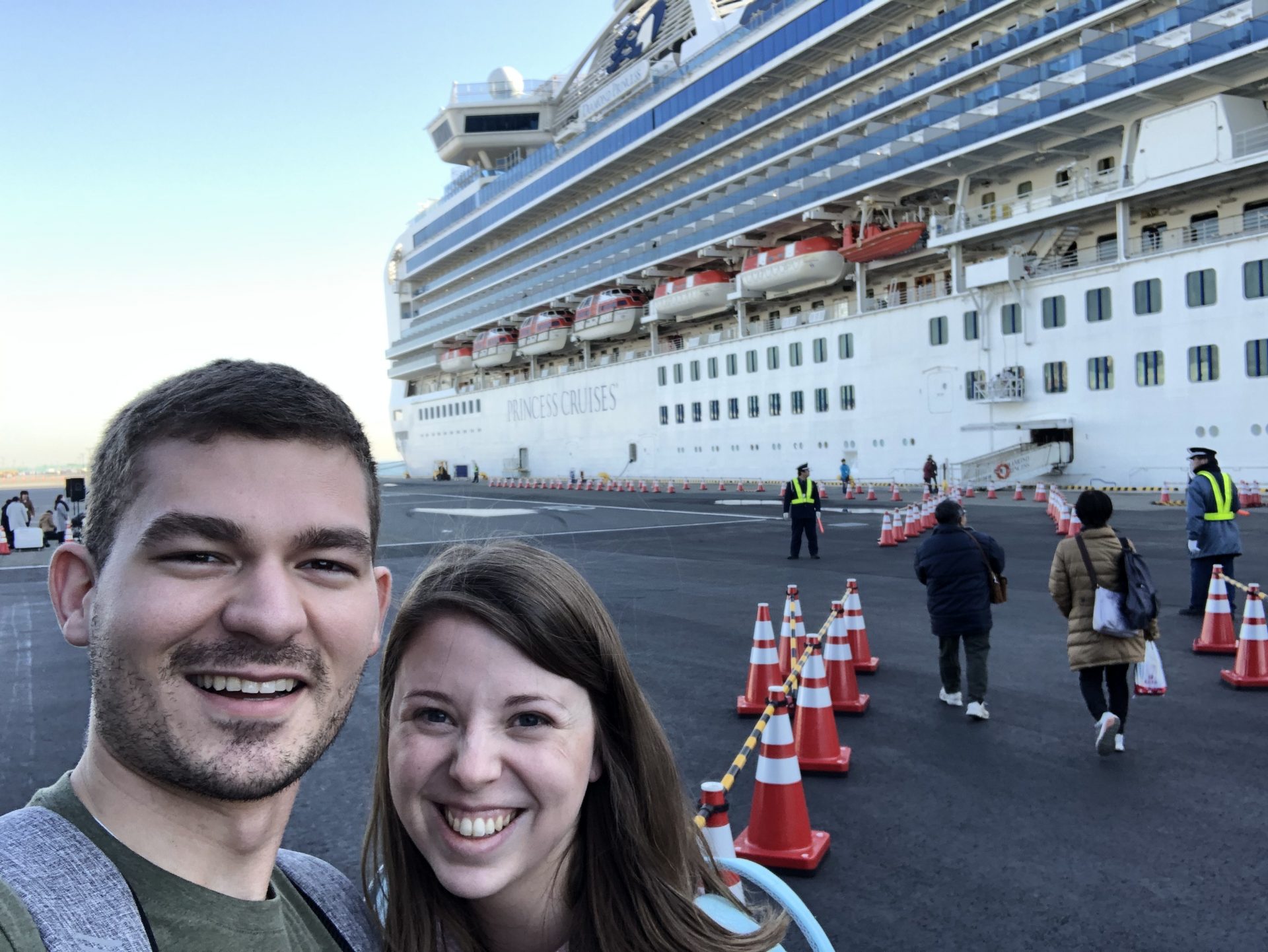 Today is the day that we board the cruise that we’ve been looking forward to for months – The Diamond Princess. Our itinerary was for the Lunar New Year, going to multiple Asian countries – notably going to Hong Kong for the New Year.

The first thing planned for the day was sumo wrestling practice. Sumo has been something that Rachel and I never dreamed that we’d see in person – it was something that we just watched on television. As a kid, I was convinced that I was the next sumo wrestler to be considering how I was a walking, talking grape. We woke around 6AM, got ready for the day, then said goodbye to Ryugoku View Hotel.

You can see Ryugoku View Hotel on TripAdvisor!

Did someone say breakfast?

After a short train ride from Ryugoku station, we arrived at Ikegami station. We knew that we were meeting at the exit of the station at 8AM and had a little time to spare, so we thought.. what’s to eat around here?

Closed… closed.. closed.. OPEN! McDonalds, our first breakfast in Japan. We’re slightly ashamed of this, but it was the best sausage egg and cheese McGriddle I’ve ever had! It was also a nice escape from the cold. When crossing the streets to get to McDonalds, we thought, “why are y’all driving on the wrong side of the road?” It’s such a culture shock to see people on the left side.

We met with our tour group and were off on foot to our tour site – a sumo stable. Surprisingly, we had people of every nationality in our group, notably a couple from London who we took to.

The streets were fairly narrow in Japan.

It was only around 30 or 40 degrees Fahrenheit out, but somehow seemed much colder – by the end of our walk, we couldn’t feel our feet! Icicles, I tell you! We made a brief stop in the parking lot of the sumo stable to go over sumo history, rules, and events around Tokyo. Turns out, the largest tournament was going on right next to our hotel! The biggest rule of all: keep your feet out of the ring. It is considered disrespectful to enter the ring or to show the soles of your feet to a sumo wrestler. They also requested that we stay as quiet as possible. We sat Indian style – the last thing I wanted was to be thrown through the wall by an angry sumo wrestler.

If you want a warm coat, I highly suggest the brand “Weatherproof.” You don’t feel a thing when walking outside, just warmth!

On to the sumo!

We entered the sumo stable, took off our shoes at the door, and sat on a small pillow on the floor.

The first thing that they did was lift their leg in the air, stomp, and squat continuously. This helped them stay flexible.

Everyone was quiet as a mouse, but there was a baby behind me. This baby was subject to unfortunate attention – he pooped his pants while a wrestler was mid-squat. There were some ill-timed laughs – what a poopy situation for that dad!

All of a sudden, they tackled one another! Some would tackle so hard that they would be pushed to the wall from the force.

Remember the Kool-Aid man that runs through the wall on Family Guy? That’s about what we imagined. These men were giant muscle machines.

Lastly, they prayed to finish their hour long session.

What a cultural experience that was! We put on our shoes and headed outside for a photo op.

Rachel and I with two sumo wrestlers.

After sumo, we had nothing left to do before boarding the cruise. We finished far before we thought we would, leaving us plenty of time to do various things throughout Tokyo! We thought, what better to do than visit Tokyo Station and roam around?

After taking the train to Tokyo Station, we were starving. We stopped at a traditional Asian bakery (i.e. 85C Bakery) to get something to eat – WOW! I had a cheese crusted hot dog of sorts – try a bakery similar to this if you get a chance!

Best way to describe it.. explosion of flavor! Ka-pow!

What’s next? How about The Imperial Palace!

Here’s a view of Tokyo Station on our way to the Imperial Palace!

The Palace grounds itself were wide open and free to walk up to. There were many tourists here, but not an overwhelming amount – you could maintain your own privacy. The palace itself was guarded by military men. There was also a garden on site that we did not get a chance to visit. Here are some pictures of our brief visit!

Back to the train station!

We returned to the train station with one thing in mind – let’s try an adventurous food! What should we eat? We heard online and from a friend that Okonomiyaki was one of the most famous must-have foods in Japan, and lucky us there was one nearby – “Tsuruhashi OkonomiYaki Teppanyaki Omoni Marunouchi.” A mouthful, literally!

We tried a seafood version – octopus, pork, and squid. Definitely one of the more adventurous things to try!

Personally, I enjoyed the taste, but couldn’t get past texture. Tentacles are a big nope!

We also have heard that 7-Eleven is the holy grail of Japan, and that so many things are sold. One of the staple items that is sold in a Japanese 7-Eleven is a bento box. We wanted to get one of these at Haneda Airport, but ended up skipping in favor of getting to Akihabara sooner!

The first Japanese 7-Eleven that we saw in Japan.

Off to Yokohama, Japan!

After heading back to Ryugoku View Hotel to pick up our luggage, we began the hour journey to Daikoku Pier. Inadvertently, we went to Yokohama station thinking that we could get to the terminal easily – boy were we wrong! It was an hour bus ride away from the train station. While taxi’s are expensive in Japan, we decided to pony up and pay for a 20-30 minute ride so we could board the Diamond Princess rather than be hopelessly lost.

All aboard the Diamond Princess!

Once there, we went through security and boarded the Diamond Princess! We thought that it would only be a 15 night cruise, little did we know that we wouldn’t be getting off for 30 days.

Rachel and I boarding the Diamond Princess!

If you’re interested in cruises, check out Cruise Critic for some good deals! It’s a wonderful way to see the world.

We upgraded our stateroom less than ten hours ago, so there were issues during check in. We still were assigned our interior stateroom, but I had payment confirmation of our balcony. After a long customer relations line and many hours of travel, we made it over to our room – a balcony stateroom! We definitely recommend getting a balcony – it’s so nice to be able to breath fresh air, wake up to the sun, and have access to the ocean so easily.

One thing Rachel and I looked forward to on our return was to go to Kyoto. We knew that on the train, we’d be able to see Mt. Fuji. We were located around 50 miles out from Fuji, and didn’t expect to be able to see it until passing close.

After walking through the lobby, we couldn’t believe our eyes!

Mt. Fuji in the background of Yokohama.

Fun fact: Fuji is actually worshiped. Rightfully so, as this volcano is known around the world for the dramatic slopes from the horizon. We ran up to the 15th deck to get a better look outside. Sure enough, people were in disbelief that Fuji was visible from this far away – it’s a testament to how large it really is!

Rachel and I with Yokohama city, Mt. Fuji in the background.

This isn’t your ordinary cruise ship.

Just prior to setting sail, we attended the safety briefing. This was especially interesting – we realized that this wasn’t your ordinary cruise. The entire safety briefing was done in both English AND Japanese. This became a trend throughout the cruise – all announcements took twice as long and were quite comical.

The cruise had different activities that helped each culture come together, such as origami, kanji, or yukata wearing aided by Japanese citizens! To clarify, kanji is the equivalent of “letters,” and a yukata can be best described as a “summer kimono.” More on this in a future post!

The first day aboard the Diamond Princess.

Our long day comes to an end.

The first night of our cruise was spent catching up on sleep, as we stayed awake for most of our flight and stay in Tokyo. We only went to the safety drill and dinner at 7:45PM. Anything else, and we would be total zombies.

A close-up of Mt. Fuji as we sailed away from Daikoku Pier.

While our time in Tokyo was short, it was well worth it! I recommend everyone take a trip to Japan at some point in their lives. You can find great flight and hotel prices, as well as fun excursions on TripAdvisor!

Next stop, Kagoshima, Japan! But first, a sea day aboard the Diamond Princess. 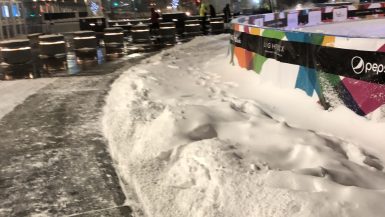